I know what you're thinking. You're saying to yourself, "Isn't baseball Xtreme enough?" You are wrong sir...dead wrong. Watch this Youtube and see for yourself. If you've never experienced 29 people on a baseball field at once, 2 pitchers, 2 batters, and people running both ways on the basepaths...then YOU have never experienced National Xtreme Baseball.


To be honest, I dont really know what to make of this except that its wrong. Wrong like Carlos Mencia wrong. You should see some of the team names too. I mean, you cannot be Xtreme with a team called the Seattle Stars, Nashville Sparrows, or the Minnesota Miracles. That, and the lack of a DC team is appalling. Baltimore and Richmond get love? Philly and New York get love? But no DC? Just a travesty! 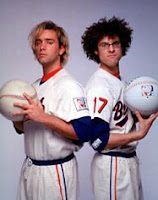 Really, this is not the way to make baseball "Xtreme". Just by having more people run the basepaths does not make the game more exciting. It just adds another circus ring to the one ring circus we have. Twice as much circus does not make the circus more exciting, just gives you less time to shell a peanut, get a beer, and talk with your buddies while kinda watching the game. If they really wanted to make the game better, they should've taken a page from these guys and made baseball more like this: 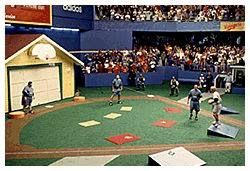 Dropped by Chimpanzee Rage at 1:00 AM

Man, I still love Baseketball and it's sport-movie mockery.